We finally took the plunge and joined the RV world. Ever since I had my first panic attack while tent camping three years ago, we’ve been trying to decide the best way to make the leap. Yes, we’re both overthinkers, and as I mentioned in my bathroom series we’re also very debt-averse, so it wasn’t a decision we made lightly. Obviously, since it took three years!

But seriously, a trailer, a fifth wheel or a motorhome, a truck camper or a tent trailer, there are so many factors to consider. Ultimately, we decided we didn’t want to deal with another motorized vehicle and the added expense and headache that could create. A truck camper is too small and not my kind of thing so that was easy to nix also. So then we waffled about a trailer, not wanting to store it away from the house but not having enough room to store it behind the front of our house. The bylaws, and some neighbours in our municipality are pretty rigid, so parking it on the driveway is not an option. Not really our thing, either.

Searching Facebook marketplace, a 1996 Jayco tent trailer came up for a decent price not too far from our house. Living on an island we don’t have quite the same access and availability as people on the mainland, so you have to move fast. This seemed the perfect solution, small enough to park in the driveway, but large enough for us to use as a family.

It’s in beautiful shape for a 23 year old camper, so despite assuring each other we would walk away and think about it overnight, we made an offer right away and drove it home the next day.

After a minor Griswold moment that our awesome brother-in-law came and helped us out of, we realized the tent trailer is much bigger than we thought – yes, we measured but that doesn’t give the visual impact that having the actual thing sitting there does, we decided storage was the only option. Oops.

It’s worked out beautifully though, because the storage place is out of town right near where we’ll be mostly using the trailer and we don’t have to haul it through town every time. It’s very affordable, as was the tent trailer, compared to if we had gotten a larger trailer or fifth wheel. Most RVers seem to think a tent trailer is the perfect way to see if you will actually use an RV as often as you think you will, especially if you buy privately and don’t mind a retro look. We can use our trailer without worrying about things getting damaged, or any depreciation – this puppy can only get better!

There are many impressive pop-up camper makeovers on Pinterest, and as much fun as that could be, that won’t be happening to ‘Happy’. I intend to spend my time camping and hanging out with my family and friends, not redecorating a camper that’s just going to get dirty anyway. Life’s too short, and that’s what my home is for. I go camping to get away from all that.

Anyway, we took Happy out for a test night with our youngest last week and she performed beautifully! We thought towing and backing up would be stressful because neither of us has done anything like that before but after researching some tips online (important!), and taking things slowly, it was not a big deal at all. Set up was a breeze, we used a curved leveler that made it so easy, and again, benefitted from the tips I read online beforehand.

We were so pleased with how easily everything went the first day but of course you don’t really know until you sleep in it. What surprised us most was how sturdy and stable the trailer was. With the ends sticking out, I always thought pop-ups looked a bit precarious and wobbly, but it didn’t move at all or make any sound as we moved around. We were all so comfortable and slept so well, we were sad we could only stay one night.

We already had three other camping trips planned but we came home and booked three more, including 5 nights in August which is the longest we’ll have camped since we travelled through Europe together in 1994. We’re excited to do some spontaneous camping too, at some of the first-come, first-served sites.

Now when we head out of town to pick up the trailer, we say “okay, let’s go get Happy.” 😊 On second thought, maybe we should call her “Happier’ -? La vie est belle! 😊

Okay, finally here are some photos. 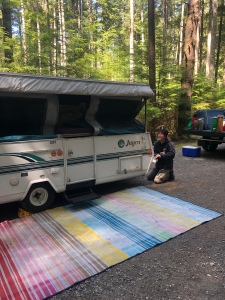 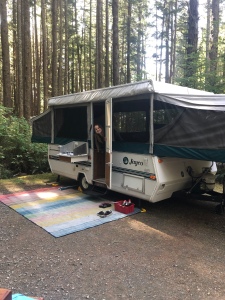 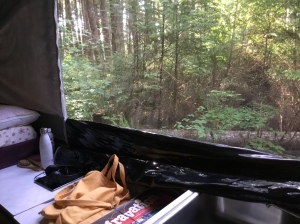 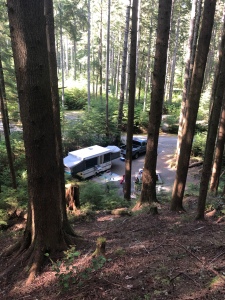 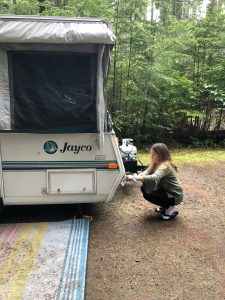 Easy enough for our ten year old to do! 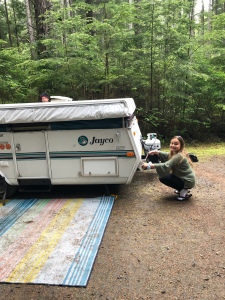 24 thoughts on “Our Happy Place: Our portable, compact vacation property”

This site uses Akismet to reduce spam. Learn how your comment data is processed.

Join 616 other subscribers
Follow Walk a Myelin* My Shoes on WordPress.com

VOTE: Repaint or let age?
Making red sauce with only ingredients from the garden - Roma tomatoes, leeks, garlic, parsley and basil butter. Taste of summer in March! #foodismedecine #yearroundgardening #backyardgardener #freshvegetables #growyourownfood #walkamyelinmyshoes
Stubborn or stupid? There are easier ways of doing this but good old elbow grease was strangely satisfying. As my beautiful mother would say, “ Ven schon, den schon” (spelling questionable, meaning as I’ve always understood it- if you’re going to do it, get on with it and do it well) #anotherproject #frontentry #slowlybutsurely
Today in the garden. #beautifulblooms
Today’s visitor #hummingbird #spiritanimal #backyardnature
Purple radishes - who knew? #urbangarden #growyourownfood #healinggarden